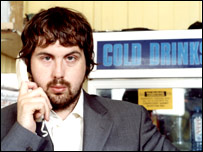 BBC recently interviewed Richard X as part of a series profiling major songwriters of recent years. It examines his mash-up past,

The idea, he explains, was "escaping from that world of formatting - which the DJ culture and club culture relies on so much.

"They were supposed to be the future of pop music."

and he's a bit modest about his production abilities on a #1 UK single:

"You could probably forget about the synth and as long as you had the Sugababes around at your house, you could recreate that record."

(Thanks to Si for posting this at bimfactor)
Posted by Daft Monk at 9:57 AM
Labels: Richard X