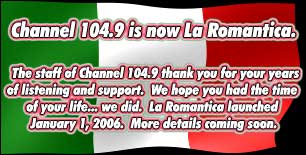 Clear Channel's local alternative station just flipped formats to a Spanish language station at the start of the New Year. Originally started in the late 90's playing 80's Alternative, the station evolved over the years into a station in direct competition with the Bay Area's longstanding Modern Rocker Live 105. On the whole the station lacked the personality of Live 105, particularly since Sean Demery took over from the hack PD who attempted to ruin Live 105 a few years back, but had some nice features like the daily "What The Hell Was That?" and their Saturday night line-up. Oddly enough I just ran into a year old article on the day I discovered the format change that seems oddly prophetic:

Aaron Axelsen, the music director for Live 105, 105.3 FM, doesn't believe that battle is over, though the week I spoke to him, a major alternative station in Washington, D.C., switched its format to ranchero. "It's an interesting crossroads for radio – more competition with satellite radio and iPods and MP3s and 21st-century mediums that have empowered people to create their own musical
mix – but radio listenership has maintained even though we've been hit by all
these new-school mediums, so we have to work extra hard to come up with creative
programming."

: It's also worth noting that the 104.9 frequency hosted a Spanish language station as far back as I can remember before the late 90's flip, and if I remember correctly it went by the name Radio Romantica and ended up just moving down the dial a bit. The new station's name: La Romantica.