(note: the following review was written some time ago) 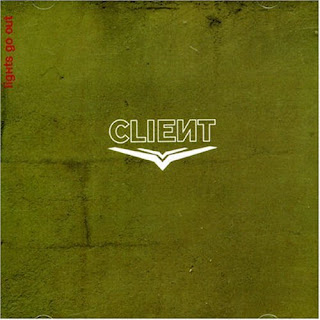 Client use "Lights Go Out" to tell the story of a woman who goes to extreme lengths to win the affection of an undeserving partner she finds herself "guilty of loving". Over the course of the song the narrator offers, in a pop friendly turn, to be the "guilty pleasure" of what we learn in the final verse is a promise breaking lover that forced her to "learn the hard way" that there are "no guarantees". Given the band's recent split with Toast Hawaii/Mute this redefinition of the band's mission statement, first laid out in Client's self-titled song that was their public debut, of "satisfaction guaranteed" suggests meaning for the band outside the song's narration. However as interesting as it is lyrically the song is musically a mishmash of ideas they have explored before. The swinging beat of "Pornography" and the ominous string sound of "Radio" are clearly echoed here but "Lights Go Out" lacks the clarity and melodic vision that was so vivid in Client's earlier material.

"Northern Soul" is better than average b-side fair flair despite noticeably recycling the riff from "Rock And Roll Machine". Really any song that had the audacity to declare "you need a bit of Northern soul" and that they "know the girls to give it" would be worth a listen and fortunately this tune has even more than that to offer.

If the original "Lights Go Out" lacks greatness then the single goes on to prove that a song cannot be saved with a little magic remix dust. Oliver Koletzki & Sebastian Meindl's deconstruction is full of stutter edits and vocals cut from the single version of the song which makes for some interesting moments but it is ultimately less than satisfying. Basteroid and Boosta flavor the song with their own respected arty electro seasonings but achieve uninspired filler at best. Spetsnaz begins his mix with enough promise that there is hope that a François Kevorkian-inspired spin on the song could develop but unfortunately the mix crashes and burns about a minute in quickly devolving into an amateurish mess. All in all it's the least appealing package that Client has assembled to date.